A quietly somber, middle-aged woman, Becky most often is adorned in faded jumpsuits with a brightly colored bandana holding back her long, dark hair. Her thick glasses as well as her hands are never without engine grease smudges, but her handmade weapons and other creations are immaculately kept. She always has a flask of something on hand, as well as a small, drab-colored, hand-crank radio she has modified to play tape cassettes. This radio is rarely silent, constantly playing music of the old world Becky has collected over the years, making up for the more quiet, somber personality of the woman herself.

Originally from Sargess, Becky currently resides a short distance from Trelling, preferring the comforting solitude of a shack in the Sandsea rather than the din of the city proper.

She left her original home in search of her sister Ami Suresh, who has been missing for twenty-four years. With Becky’s searches coming back fruitless for over two decades, she had almost given up hope of ever finding her, and settled outside the capital city (see Becky’s Place), taking repair jobs and making a living with her mechanical expertise learned from working on the nomadic fleet of vehicles of her homeland. She figured if Ami were to turn up anywhere, she would have to go through Trelling at some point or other.

A solitary person, Becky often wanders into the desert itself, looking for ruins of the old world to salvage materials from. Tough these journeys are often fruitless, she enjoys being in the dust and the heat, no sound but her radio in the silence of the wasteland.

Sometimes, she spots slaver raiding parties coming from the mainland, dust clouds raising up in plumes from their skiffs and wheels as they race toward Vidaar. These she treats with a coldness others might not think her capable of, destroying them with explosives, lead, and an utter lack of mercy. 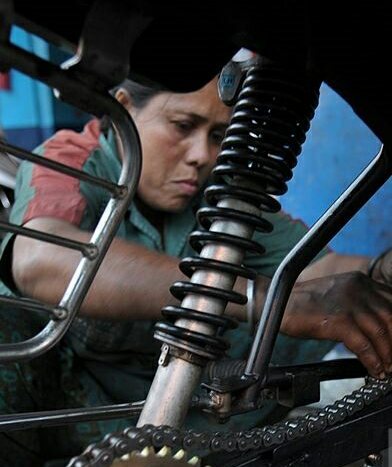